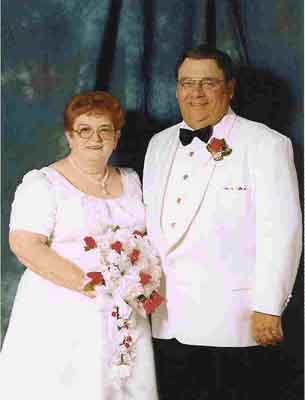 On June 27, 2001, at the York Expo and Convention Center in York, Pennsylvania, Carla K. Thompson of Wm. E. Gelston Chapter and Robert C. Penoyer of Rainbow Chapter No. 517, were installed as Worthy Grand Matron and Worthy Grand Patron respectively.

The motto chosen reads “Those who walk with God always reach their destination.
The theme for the year is Reach for the Stars on the wings of love.
The WGM’s fun emblem is a Scottish Terrier and the WGP’s is an airplane.

The Worthy Grand Matron was the Installing Officer in four Chapters: 205, 406, 435 and 501.  Both the WGM and WGP were able to visit all the Veterans facilities but one.

On September 11, 2001, a terrible event occurred in our country.
The bombing of the World Trade Center in New York City caused the deaths of many Americans.  The Board of Directors of the Grand Chapter of Pa. Sent $5000 to the Salvation Army’s Disaster

Relief Fund in New York City.  The member of our Order amassed $12,897.60 to aid those who suffered at the hands of the terrorists.

On September 15th the Order of the Eastern Star and the Order of the Amaranth held a reception at Patton Campus in Elizabethtown.  It was a casual affair with 110 members of both fraternal organizations attending.

The special projects for the year were the Fraternal Fund, Multiple Sclerosis and Make-a Wish-Foundation.

The Loving Spirit Session, the 108th Session of the Grand Chapter of Pennsylvania, was held on June 18-20, 2002, at the newly constructed David L. Lawrence Convention Center in Pittsburgh, Pennsylvania,  Janet Jo Dodson, Sessions Chairman, and Barbara
A. Brubach, Co-Chairman, and all the members of the Session Committee worked diligently to provide a beautiful Session for our Members.